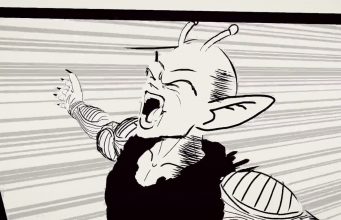 As a current artist-in-residence on the Facebook Social #vr team, Goro Fujita has been making some pretty impressive “quillistrations” as a part of his daily creative regime using Quill, #Oculus’ first-party VR paint and drawing tool that he helped develop. In a few of his latest creations though, Fujita has been plumbing the possibilities of bringing comics to life in VR. As Fujita puts it, he’s now convinced “VR comics will be a thing.”

Taking inspiration from the Dragon Ball manga, Fujita recently recreated the iconic moment when Piccolo sacrifices himself for Gohan, the eldest son of series protagonist Goku. The animation effects lend the work a decidedly more manga-like feel than anime per se, something Fujita calls “manime.”

Now for Fujita’s interpretation—you can check it out for yourself in Facebook Spaces, the company’s social #vr app that lets you chat, share 360 photo and video, and now Quill projects too.

I’m now convinced that #vr comics will be a thing! 😀 Took a dragon ball page and made a #VR #Quill version of it. Check it out in #vr in #FacebookSpaces! pic.twitter.com/cowiN2aT1J

In a tweet, Fujita maintains the #vr illustration is “more like a proof of concept,” and that he doesn’t currently have plans to produce any #vr versions of branded manga like Dragon Ball at this time, as he prefers to make his own original content. He says however designing the scene in #vr allowed him to create it more quickly than any medium he’s experimented with thus far.

“Something clicked when I drew Spiderman yesterday and I wanted to spend a bit more time into a daily painting. I took a Dragonball page and did my #vr interpretation for it. That key moment that made me love Piccolo! How rewarding this experiment was! I would totally read comics like this! Quill comics will become a thing!”

“Spidey”
Two tone in #vr is so much fun! #Quillustration painted in #VR using #Quill
Check it out in #vr in Facebook Spaces if you can. It’s trippy! pic.twitter.com/T9Jq2Ndxok

As a former visual development artist at Dreamworks, Fujita is credited for his work on films such as Megamind (2010), Madagascar 3 (2012), Penguins of Madagascar (2014), and Boss Baby (2017). Fujita joined the now shuttered #Oculus Story Studio as #art director in 2014, and then moved onto his position as artist-in-residence when Quill’s development was picked up by Facebook’s Social #vr team.

Fujita shares Quill content most days via his Twitter, and hosts a monthly livestream teaching session for backers of his Patreon.

While virtual stalwart Fujita isn’t the first to hit on the idea of creating manga exclusively for #vr headsets—Square Enix recently released a long-term manga project called Tales of Wedding Rings #vr (2018), and last month MyDearest’s #vr manga game TOKYO CHRONOS reached its Kickstarter funding goal—he makes a strong case for the burgeoning genre. With the right understanding of the tools (in this case Quill), a single developer can quickly create a #vr comic without the need of voice actors, and without having to master a game engine.

For aspiring #vr comic creators, Fujita offers a quick look behind the scenes of how he created the Dragon Ball scene:

Here is a little behind the scenes clip of my latest #Quillustration “Piccolo saves Gohan”. Painted and animated in #VR using #Quill pic.twitter.com/uyL5ERQ6Z7

The post Facebook Artist Makes a Case for #vr Manga in Homage to Iconic ‘Dragon Ball’ Scene appeared first on Road to VR.