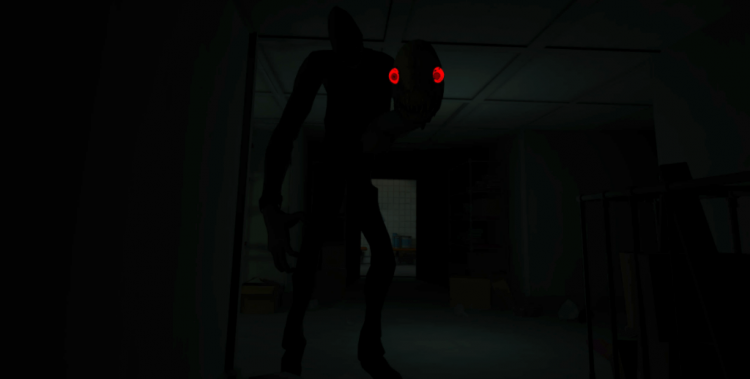 Despite being an immersive horror game with a dark tone, adult humor and multiple jump scares, there’s something charming about walking around with a swearing, highly-strung anthropomorphic puppet on your hand in Hello Puppets!
It’s this juxtaposition in tone that really pushes Hello Puppets! forward through it’s roughly 2 hour duration.
Developed by Otherworld Interactive and funded by #oculus Studios, Hello Puppets! released late last year on the #oculus Store, exclusively for the #oculus #Rift S. In general, Hello Puppets! doesn’t reinvent the #VR wheel. It features fairly standard puzzle mechanics in a short, linear narrative-driven horror #VR game. All of the core elements at play work fine but wouldn’t necessarily stand out in a lineup. However, near the beginning of the game, something happens that adds an interesting twist to how you play — a puppet named Scout is sewn onto your non-dominant hand and comes to life, quipping and guiding you through the rest of the game.
The two of you are bound together, physically and narratively, and while it sounds like a simple concept, it’s a welcome one. The addition of Scout the puppet is what drives this game to be more than just a stock standard horror game — she provides quippy dialogue and interactions, a needed break from some of the intense horror moments, and also introduces some unique gameplay mechanics.

You play as a journalist sent to investigate a decommissioned warehouse, which you soon learn is controlled by two creepy mastermind puppets named Riley and Mortimer. They’re abducting humans and possessing their bodies with sewn-on puppets, just like Scout. The catch is that something went wrong when they abducted you, and Scout isn’t in control of your body like she should be. This forces the two of you to work together to escape the warehouse while being pursued by Mortimer and Riley.
It’s a simple story that won’t shock or surprise you, but that’s not necessarily a bad thing. The focus is not on the narrative twists, but instead on the characters and the bond you form with Scout along the way. Scout is an equally perfect guide, side character, and gameplay mechanic. Her dialogue is perfectly written to balance out the creepy setting with some dark humor, and she quickly becomes the shining diamond of the entire game.

The game’s environments are dark and unsettling, witht he atmosphere being just creepy enough to keep you consistently on your toes. There are some good jump scares too, which will leave you adequately spooked but not overly annoyed. The general tone of the story is also refreshingly adult — this is not a kid’s game by any means. There are some dark implications about what’s going on in the warehouse and Scout has quite the motormouth on her. While your own character is mute through the story (which, in-game, is explained by your mouth being sewn shut), you can still communicate and respond to Scout’s dialogue by nodding or shaking your head, which makes for some fun interactions.
However, if there’s an area where Hello Puppets! starts to disappoint, it’s the gameplay itself. As mentioned earlier, the mechanics are mostly ones you’ve seen in other games before. Having Scout attached to one hand does introduce some unique gameplay moments (which we we won’t spoil here), but they don’t feel like enough to keep everything fresh. Around the game’s halfway point, the gameplay starts to feel a bit repetitive and progressively less inventive than some of the ideas in the first half.

The only actions you perform are mostly just movement-based (getting to an area, reaching a door, or running away from a monster) or picking things up (grabbing a required item, solving a puzzle, or performing a basic action). There’s no combat and the only controls you really need to memorize are the walk button and the grip button, plus the triggers for a special action introduced later in the game. At several points, you’ll have to run away from some truly terrifying monsters, but the whole experience becomes a bit drab when you realize that there’s no real challenge in these interactions. If you don’t start walking, you’ll be helpless to defend yourself and get killed by the monster. If you do start walking, you’ll likely make it out alive. There’s nothing more to those sections and they never feel overly inventive or compelling.
The game also has its fair share of bugs that weigh it down, especially involving saving and loading games. While there’s clearly an autosave system at work, there were a few instances where I started a bit further back from where I left off, but retained items I had found in the next section. Some dialogue lines were replayed at odd times and I did have one unfortunate game-breaking bug that trapped me in a room forever upon reloading, unable to leave. While the developers helped resolved my issue and assured me they were working on patching that bug in particular, it’s still unfortunate it happened in the first place several months after release. Combined with a few other oddities I encountered, it does feel slightly less than polished, but not enough to ruin the entire experience.

Hello Puppets! Review Final Verdict
Overall, a lot of the core puzzles and gameplay in Hello Puppets! might feel familiar. There’s buttons to push, enemies to evade, and levers to pull – nothing you haven’t done before. However, where the game shines is the dialogue, characters, and unique gameplay mechanics that stem from having a anthropomorphic puppet sewn onto your hand throughout the entire experience. Not only is the voice acting excellent, but the writing is humorous and the adult tone, with swears and all, feels perfectly placed to balance out the macabre, slightly over-the-top and terrifying setting.
Hello Puppets! didn’t blow me away, but it also didn’t have to. While not everything is perfect, it makes up for the areas it lacks in with some exciting and refreshing elements that add some levity to the horror setting. If you enjoy the horror genre in #VR, it’s probably worth checking out for the slightly different take on the genre and humorous addition of Scout the puppet. In many ways, Hello Puppets! has a lot of parallels to how you might approach a blockbuster horror movie — while not particularly groundbreaking, if you have a few spare hours on the weekend, it might be worth checking out for a bit of fun, a few scares, and maybe even a laugh.
Final Score:     3/5 Stars | Pretty Good