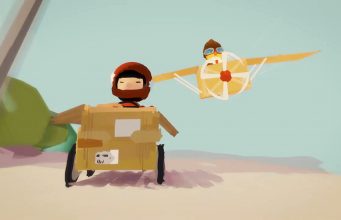 Quill, #Oculus’ #vr painting and drawing tool, recently saw a major update which added animation tools to the software, allowing users to create animated sequences directly in VR. A resident artist at #Oculus has taken to the tool to show the incredible potential of drawing and animating in VR.

Formerly a visual development artist at Dreamworks, Goro Fujita is a talented artist in his own right, with his name in the credits of films like Megamind (2010), Madagascar 3 (2012), Penguins of Madagascar (2014), and Boss Baby (2017). Fujita joined #Oculus Story Studio (where Quill was built) as #art director in 2014, and though that department closed, he stayed on as an artist-in-residence when Quill’s development was picked up by Facebook’s Social #vr team.

Following Quill’s update which added animation tools, Fujita has been creating and sharing animated artwork made in VR, using his talent as an illustrator and animator to show the incredible potential afforded by the medium. His Twitter feed is a trove of Quill micro-shorts, which show how with little more than a short animation loop, simple but thoughtful sound design, and strong #art direction, you can convey action, emotion, and immersion from just a few seconds of animation. Here’s a handful of my favorites from his recent works:

Animating transformations is so much fun in VR. So much easier than with traditional methods. I did reuse some assets from my short film like the junk piles and the fences. Which helped to build this quickly.

This is a POV test. I strongly believe character POV’s in #vr are a powerful story telling tool as you can relate to the characters in a way that wasn’t possible before. And the craziest thing of all is the speed #Quill allows you to create…This took about 1h30min to complete… pic.twitter.com/PK1UwJBdb2

Ok….the race is on!!! I combined @KurtChangArt ‘s cardboard plane with my cardboard race car and then grabbed the airplane and puppeteered it around while capturing the screen. And man….how quickly you can get dynamic shots like this… holy crap! All done in #Quill pic.twitter.com/7s2b9p6B9N

This piece is particularly neat because it’s a collaboration; Fujita had initially drawn the side of the door with the man holding the roses, and artist Kurt Chang responded with the other half of the door—Fujita combined the two into a single scene, together telling a micro-story.

“First Date Extended Edition”@KurtChangArt followed up my “First Date” piece with what’s happening behind the door. I decided to merge our pieces together and it fit perfectly. So fun to do collaborative #VR paintings in #Quill pic.twitter.com/WYM2mQst55

Why Illustrate and Animate in VR?

You might be wondering why working in #vr is much different than working either in traditional 2D or 3D. Let’s talk about a couple of reasons.

Working in #vr the way that Fujita does is like a mashup between traditional 2D animation and 3D animation. For one, Quill allows users to draw and sketch with volume, in three dimensions. Traditional 2D animators have to have a strong internal concept of what an object (a cube, let’s say) would look like on all sides and how it should be represented as a 2D object in any given frame, taking both perspective and volume into account.

In order to hand-animate a 3D object in 2D, the artist must draw discrete frames showing the object’s different sides being revealed as it rotates and moves through space. Animating this way affords the artist deep control over the look and feel of objects—which can lend itself to a more ‘textured’ and ‘human’ feel compared to traditional 3D animation—but one major problem with this approach is that the frames can’t be easily reused for additional shots and angles because the artist is effectively creating a flipbook of 2D drawings in a sequence, not a 3D model. And since the subject isn’t a 3D model, the artist must also manually draw any lightning onto the subject (which is extremely difficult in cases where both the subject and lights might be moving). This is one major reason why traditional 2D animation is time consuming and expensive.

Traditional 3D workflows of course fix a lot of these problems. If you want to animate a cube, you’d create a 3D model of the cube first, and then move the cube itself to animate it rotating. Since the model is already built, you can move it and view it from any angle without needing to draw or build new views of the object, and computer rendering precisely handles perspective, volume, and lightning. This saves a ton of time, but reduces the amount of control that the artist has over the look and feel of the animation, which is one reason why traditional hand-drawn animation (like The Lion King) looks so much different than computer animation (like Toy Story).

Working in #vr with a tool like Quill, artists get many of the time-saving benefits of 3D animation while retaining much of that essential control over the look and feel, which comes from 2D animation.

VR allows artists to literally draw in 3D, since they are working with controllers with can track their movements with six degrees of freedom (vs. just three degrees of freedom with 2D animation). That means they can draw their subject directly in 3D, and get the benefits of being able to then view the model from any angle, instead of needing to animate each side of the object individually.

In many of Fujita’s works above, you can see that beautiful hand-animated look, but also see how he makes use of the benefits of 3D animation by creating multiple shots from different angles to extend short animations into dynamic moments which feel much longer than the number of animated frames would imply—that means more content with less creation time. The ‘Cardboard Race’ piece above with the cardboard car and cardboard plane is a great example of this in action. You’re actually looking a short animation loops with a few small tweaks (like the position of the car and plane) which would have taken a lot of extra work if those shots had to be redrawn from those angles with a traditional 2D process.

In many of Fujita’s tweeted works, he talks about how quickly he’s able to compose these micro-shorts, with many of them taking just 30 minutes to 1 hour and 30 minutes to complete. “Never imagined I could do daily [VR] animations,” he wrote in one tweet, “VR opens a whole new door for creators!” he wrote in another.

Fujita has been open about his artistic methods and #vr artwork, and actively shares his knowledge through live-streamed sessions where you can watch and learn how he illustrates and animates in VR—check out his Patreon if you’re interested in seeing how he does it.